Found this great Chicago Tonight TV news segment on urban chickens in Evanston (where they're illegal) and all around Chicago (where they're legal). What I love about segments like this is how they re-kindle the excitement and enthusiasm and "ain't-this-cool?" factor of having chickens in the backyard. Take a look yourself:

If you're saving it for later, the quick synopsis of the six minute segment is: A profile of Laurie Zoloth, a bioethicist at Northwestern University, who is keeping chickens in her Evanston backyard in direct violation of the city code against it. The reporter then takes us on a tour all around Chicago to see the hens and the coops and the owners talking about why they have their legal chickens in the city. A bit talking to a local Feed Store owner confirming interest in chickens is really picking up. There's even a quick appearance by Tashai and Robert (our Mad City Chickens producers)!

All around, a nice piece, and it features some good ambassadors of the urban chicken movement. Thanks to Mr Brown Thumb for the original post about the segment over on Chicago Garden.

As a footnote, when I first started writing this blog, it seemed all things urban chicken were talked about in early Spring as folks busied themselves getting ready for the annual plantings. Now, however, the fascination with urban chickens seems to have decoupled from the gardening season and is on its own track and is building momentum. So great to see so many people interested in the wonderful experience of hosting urban chickens in your own backyard!
Posted by Unknown at 11:53 AM 6 comments:

Can you help chickens at the animal shelter? 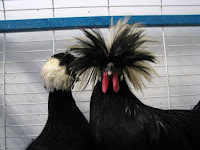 When looking to add to your urban chicken flock, there are many places besides the feed and fuel store where you can find a new hen including Craigslist, the local chicken group's listserv, and... the animal shelter!

Yes, chickens wind up at the animal shelter just like any other kind of animal, but it's not usually the first place people think to look. For a small adoption fee, you can spare these chickens from an untimely demise and add a new bird to your flock.

Here in the Bay Area, there are several chickens available right now (shelter names are linked to the respective web sites for follow-up): 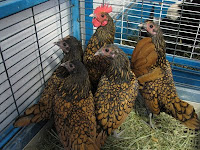 If you think you can afford to house one more chicken, please consider reaching out to help those whose time is running out at a shelter near you.

A big thanks to Anne M, a volunteer at the Oakland Animal Shelter, for her helpful reminder and for the photos of the chickens available in Oakland in this post.
Posted by Unknown at 9:38 AM 14 comments:

It's not hard to see that keeping urban chickens are part of at least two of the solutions published in Scientific American's 10 Solutions for Climate Change.

Consume Less: cutting back on consumption results in fewer fossil fuels being burned to transport products around the globe.

By keeping hens in your own backyard, you're able to cut back on the transport requirements from manufacturer to your house for several items at once:
Eat Smart, Go Vegetarian? Organic produce is often shipped from halfway across the globe. And meat requires pounds of feed to produce a pound of protein. Choosing food items that balance nutrition, taste and ecological impact is no easy task.

By keeping chickens in your backyard as part of a larger gardening experience, you know exactly where your veggies have come from (and where the fertilizer is sourced, too). Moreover, you've got a great source of low-cost high-quality protein produced for you almost every day: the egg.

No need to go vegetarian to lessen your impact on the climate, and no need to eat the birds themselves. A couple backyard hens can produce a dozen eggs a week for you which provides plenty of protein as part of a sensible diet.

As part of Blog Action Day, take a look at the rest of the 10 Solutions for Climate Change and add to the comments any ways you find urban chickens are part of on of the solutions.
Posted by Unknown at 5:50 PM No comments:

(Spoiler alert: absolutely nothing!) In early 2008, there were quite a few ruffled feathers and loud squawks of despair around the thought of legalizing urban chickens in Fort Collins, Colorado. The arguments against keeping chickens were the usual "we don't want no dirty, smelly, loud, disease-infested, rodent-attracting critters around here" kind.

However, thanks to the perseverance of Dan Brown of the Fort Collins Urban Hens, the measure (a strict one, at that) was passed in September 2008, allowing six hens per household.

This week, the Coloradoan has a great follow-up story on all that's happened in Fort Collins since chickens were made legal, and as we urban chickens fans would expect, everything's gone just fine, thankyouverymuch.

In fact, a total of 36 households have acquired chicken licenses (and one could assume, chickens, too), yet none of the bad things the opposition had foretold has come to pass.

Director of animal control with the Larimer Humane Society, Bill Porter, says that of the 14,314 calls to animal control since the chicken law went on the books, "There were four calls of complaints from roosters crowing." The four roosters in town that peeved off neighbors were "accidents," Porter reports: owners thought they were buying hens as chicks only to discover they were roosters. "The other two regarded smell and location of the coop, and both cases were unfounded." (emphasis mine)

Longtime readers know that one of the arguments AGAINST urban chickens that's consistently trotted out time and again is the myth of "it'll cost too much to enforce the new rule." Even though the calls to animal control in Fort Collins were bogus, they still took time to investigate. But these calls were less than one-tenth of one percent of the volume of complaints to deal with (0.04% to be exact). A rounding error, at best.

It's satisfying to see real evidence that enforcement costs come nowhere near what the anti-chicken crew would have you believe. Yet another case of proving the anti-chicken hysteria wrong.

Reminds me a lot of the follow-up story Missoula Urban Chickens Law: what went wrong?
Posted by Unknown at 10:47 AM 2 comments: Photo credit: estherase on Flickr
Posted by Unknown at 11:06 AM 7 comments: