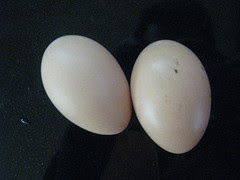 This is the third in a series of posts exploring some of the more common concerns I see raised in the debate to allow urban chickens. (see previous installments: what to do with the poop and the cost to enforce urban chicken laws)

Today's topic: Aren't all these backyard coops going to be hot spots for salmonella outbreaks?

Along with "you'll doom us with bird flu" (the next topic in this series), concerns about salmonella and salmonellosis (the foodborne illness caused by salmonella) are high on the worrier's list about urban chickens being raised in backyards across town.

After all, the nutrients that make eggs such a high-quality food for us humans are also make for a good culture for bacteria to grow in. And since the eggs in the backyard are laid in a nest that might not be as sterile as the inside of the egg carton we're all used to seeing in the store, there's a chance that bacteria may work its way inside the egg before it can be collected. But that chance is slight, at best.

The American Egg Board's Egg Safety reference calculates the odds for us:

The inside of an egg was once considered almost sterile. But, over recent years, the bacterium Salmonella enteritidis (Se) has been found inside a small number of eggs. Scientists estimate that, on average across the U.S., only 1 of every 20,000 eggs might contain the bacteria. So, the likelihood that an egg might contain Se is extremely small – 0.005% (five one-thousandths of one percent). At this rate, if you’re an average consumer, you might encounter a contaminated egg once every 84 years.

Other types of microorganisms could be deposited along with dirt on the outside of an egg. So, in the U.S., eggshells are washed and sanitized to remove possible hazards. You can further protect yourself and your family by discarding eggs that are unclean, cracked, broken or leaking and making sure you and your family members use good hygiene practices, including properly washing your hands and keeping them clean.

Yes, it's really all about that: practicing safe food preparation habits, and that's something you can do no matter where your eggs come from.

After all, Salmonella bacteria are widely found in nature, in the intestinal tracts of animals and birds (and people) and easily spread. It's that critical time when preparing raw ingredients into finished ones that the Salmonella bacteria have a chance to fester in food that's prepared in a dirty environment (anyone been following the peanut butter scare recently?) or is under-prepared or is left to sit out too long before consumption. The AEB continues:

Salmonellosis outbreaks are most often associated with animal foods, including chicken, eggs, pork and cheese, but have also been reported related to cantaloupe, tomatoes, alfalfa sprouts, orange juice and cereal among other foods. Human carriers play a big role in transmitting some types of salmonellosis. Salmonella bacteria can easily spread from one food to another, too.

The majority of reported salmonellosis outbreaks involving eggs or egg-containing foods have occurred in foodservice kitchens and were the result of inadequate refrigeration, improper handling and insufficient cooking. If not properly handled, Salmonella bacteria can double every 20 minutes and a single bacterium can multiply into more than a million in 6 hours. But, properly prepared egg recipes served in individual portions and promptly eaten are rarely a problem. You can ensure that your eggs will maintain their high quality and safety by using good hygiene, cooking, refrigeration and handling practices.

So, perhaps instead of focusing efforts on trying to prevent salmonella outbreaks by limiting the number of urban chickens in our backyards, we should instead focus on proper food preparation education? Sure enough, the AEB is a founding member of the Partnership for Food Safety Education and has a great set of literature about safe food-handling practices in its FightBAC campaign.

Oh, and for anyone who's actually picked up an egg out of an urban chicken's nest, you know its not clean on the outside what with its tufts of feather or pieces of nesting material or spots of excrement clinging to the shell.

I daresay those of us who collect our own eggs are more cognizant of needing to practice proper food handling techniques (and know how to clean our eggs) than folks buying what look-to-be clean eggs in the store.

I hope this information about salmonella helps you educate your town government in your quest to legalize urban chickens where you live. Are there other topics you'd find helpful (next up: bird flu)? Let me know in the comments!
Posted by Unknown at 5:55 AM

If you pay attention to the news, most of these samonella and ecoli issues are happening with industrial food operations, not small scale henhouses.

Bird flu spreads among birds housed in too-congested settings with poor ventilation, not three happy free-rangers in your backyard.

My biggest beef is how the law treats dogs and birds so different. Dogs are disgusting if we don't clean up their poop. They can spread rabies and parasites and they are super annoying if they bark all day and night. YET we don't disallow dogs, we don't limit the number a family can have, etc. Not fair. I'd rather have a few cluckers next to my house than that annoying cocker spaniel who barks non-stop.

Sarah, you are an idiot.

After all, Salmonella bacteria are widely found in nature, in the intestinal tracts of animals and birds (and people) and easily spread.

A "happy" chicken in my backyard is just as likely to have bacteria in its intestine as any other bird is. The happy chicken poops on the ground, not in a modern toilet. The bacteria is now in the soil where the hen will peck, scratch and bathe.

I raise chickens. They are not clean animals.